A Practical Guide to Agroecology

Agro-ecology is put forward as a mode of agricultural production that can feed the entire world population while respecting the environment. For SOS Faim, which publishes a guide on the subject, promoting agro-ecology is consistent with supporting family farming in Africa and Latin America.

SOS Faim has chosen to engage with its partners about agro-ecology, with no desire to impose, but rather with an openness to accompany the partners’ transition to more agro-ecological practices.

Caution is necessary because implementing all the principles of agro-ecology is delicate in a world which is dominated by the logics of capitalist economic systems. Plus, international trade agreements are not conducive to the development of this form of agriculture.

Indeed, while it is difficult not to be in favour of agro-ecology, in practice it is not easy to combine some of its principles. For example, a technique for restoring Sahelian soils such as Zaï is a good response to an agro-ecological approach from an environmental point of view, but it adds to the drudgery of an already arduous task in an agriculture that remains essentially manual.

This is why it was necessary to clearly define what agroecology means for SOS Faim. We started from a list of principles covering the three dimensions of the environment, socio-economics and politics. We have thus retained thirteen principles that we have explained in the most scientific way possible, and then translated into a more accessible language. 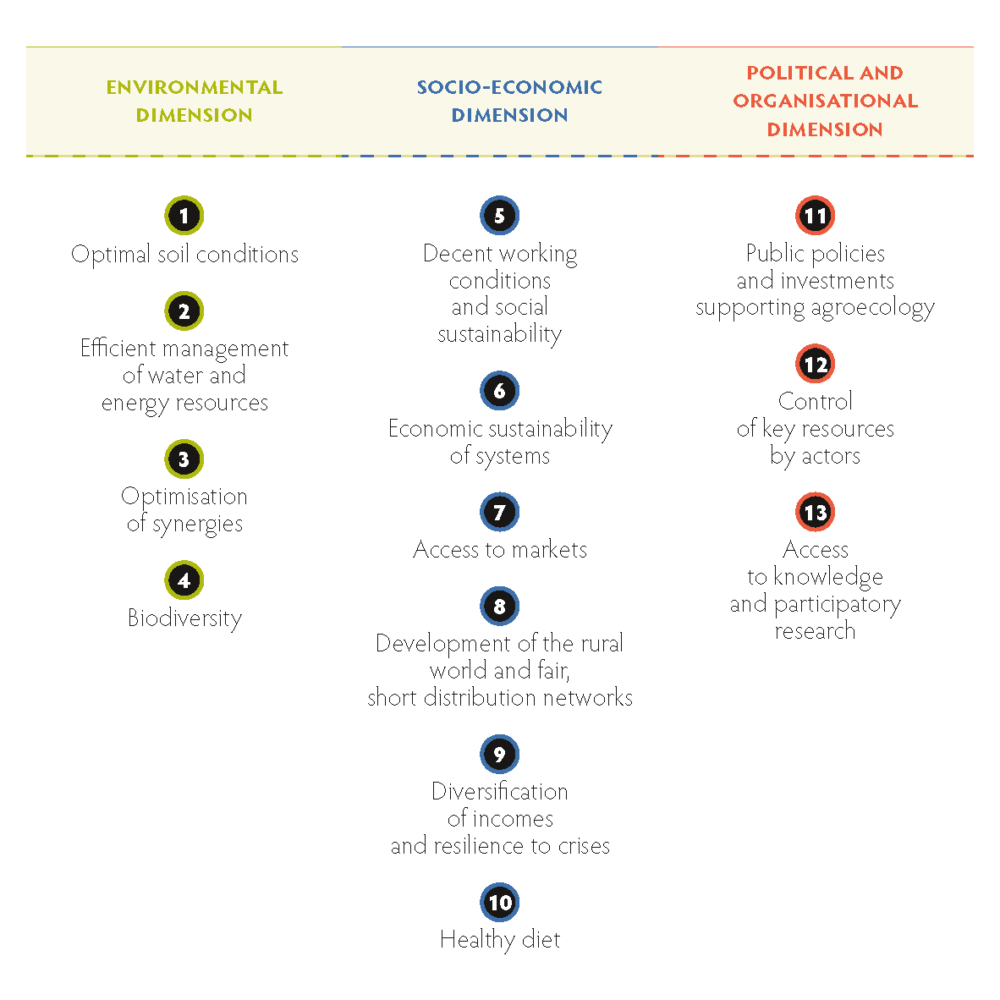 On basis of this reflection, SOS Faim has laid the theoretical foundations of its approach to agroecology, and then implemented this broad and multifaceted concept in a concrete manner with its partners in the South.

We started organising diagnostic workshops with partner organisations and a methodology was developed.

The guide presenting this methodology has just been published (here).

During these workshops, which were carried out with producers’ organizations and facilitated by farmers’ apex organizations (FONGS in Senegal, CAAP in Peru) and support NGOs (APIL in Burkina Faso, ARARIWA and REDES in Peru), it was found that the tool, which was based on a review of the thirteen principles selected, had a strong potential for dialogue, with an important participatory aspect.

As a result, the appropriation by the partners and by the local SOS Faim offices was positive. The first workshops organized led to new requests from both producer organizations and support organizations, particularly those active in territorial development dynamics (the case of Peru).

The diagnoses that were carried out by the members of the producer organizations (between 24 and 40 participants) made it possible to assess each organization in terms of the level of its practices and the distance still to be covered. In each case, it was possible to define priorities as a good basis for the strategic planning of an agro-ecological transition.

All the workshops also allowed to identify significant differences in perception according to the gender of the participants: particularly with regard to socio-economic principles and especially for elements such as well-being and hard work. This interesting dynamic generated intense dialogues within the organizations.

In all cases, follow-up action was taken. For example, the dissemination of the tool to other actors: the Conseil National de Concertation des Ruraux (CNCR) in Senegal or the support organisations REDES and ARARIWA in Peru. Or again, the restitution by workshop participants of the dynamics of the workshop to their peers. In Burkina Faso, the market gardeners of Boussouma presented the results of the workshop to the 26 grassroots groups. This led to the decision of ten of them to make the transition to organic production.

While publishing the guide for the self-diagnosis of agro-ecological practices in the farming environment, SOS Faim wishes to make this tool available to the widest possible circle of practitioners in the field, in order to improve and enrich an approach that has begun to show its value.

French and Spanish versions are available.

A promising initiative for political influence

In April 2019, a large agricultural mobilisation took place in Peru, organised by CONVEAGRO and its civil society allies, to demand more dialogue between the…

In 2010, SOS Faim made a strategic choice to focus its support in Bolivia and Peru on umbrella organisations (of secondary level), placing yet another…

The new publication of Farming Dynamics deciphers the advocacy campaigns that SOS Faim has been has been undertaking  for more than 20 years. The first one…

Between 2019 and 2022, SOS Faim in association with the Catholic University of Louvain (UCL), the NGO Eclosio, our partner AOPEB and a Bolivian university…

We keep in touch

Do you have a question ? A request ? Need some information ? Get in touch with us !